(PEOPLE) – Some vampires never die, at least at the People’s Choice Awards.
Keeping its momentum from last year, the “Twilight” saga was the big winner on Wednesday night.

The latest installment in the series, “Eclipse,” picked up four awards, including favorite movie, surpassing nominees including “The Social Network” and “Inception.” 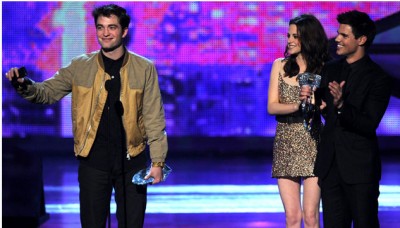 It also won favorite drama movie and favorite on-screen team at the awards at the Nokia Theater in L.A., and star Kristen Stewart beat out Angelina Jolie and Jennifer Aniston for favorite movie actress as Bella Swan.

But the film’s heartthrobs Robert Pattinson and Taylor Lautner didn’t have as much luck when it came to favorite movie actor, which was awarded to Johnny Depp for “Alice in Wonderland.”

Pattinson was beat out again in a separate category for favorite movie star under 25, which went to Zac Efron.