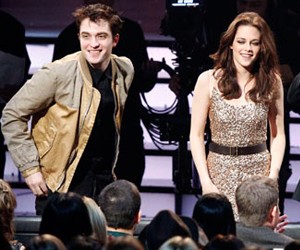 The Oscar nominees won’t be announced until tomorrow, but in the meantime there are contenders for an even more eagerly anticipated prize: the Razzies, which honors the year’s worst films and actors.

While “The Twilight Saga: Eclipse” did big box office, it also made a killing with the Razzies, earning nominations for worst picture, worst actor (Robert Pattinson and Taylor Lautner each got a nod), worst actress (Kristen Stewart) and worst supporting actor (Jackson Rathbone).

“Sex & the City 2” was more fizzle than sizzle, earning a worst picture nomination as well as a collective worst actress nod for all four of its leading ladies.

Jennifer Aniston may have flopped in theaters, but she was a Razzies sweetheart, landing on the worst movie and worst actress list for “The Bounty Hunter,” plus getting an additional worst actress nomination for “The Switch.”

Jessica Alba fared even worse, getting a worst actress nomination for four of her 2010 films: “The Killer Inside Me,” “Little Fockers,” “Machete” and “Valentine’s Day.”

Will Alba follow in the footsteps of Halle Berry (“Catwoman”) and Sandra Bullock (“All About Steve”) and pick up her award in person if she wins? Find out when the Razzies are presented on February 26.

Until then, here is a complete list of this year’s nominees:

Jennifer Aniston, “The Bounty Hunter” and “The Switch”

Jessica Alba, “The Killer Inside Me,” “Little Fockers,” “Machete” and “Valentine’s Day”

George Lopez, “Marmaduke,” “The Spy Next Door” and “Valentine’s Day”

“Clash of the Titans”

The entire cast of “The Last Airbender”

“The Last Airbender,” written by M. Night Shyamalan, based on the TV series created by Michael Dante DiMartino and Brian Konietzko

“Sex & the City 2,” written by Michael Patrick King, based on the TV series created by Darren Starâ€¨

“Twilight Saga: Eclipse,” screenplay by Melissa Rosenberg, based on the novel by Stephenie Meyer

“Clash of the Titans”

Bret: Friendship with Andi good enough for me