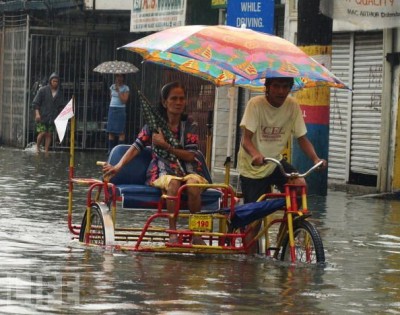 LEGASPI, December 30, 2010 (AFP) – Two people were killed and about 4,000 forced to flee their homes as monsoon rains brought flash floods and landslides to the region southeast of the Philippine capital, officials said Thursday.

An 80-year-old woman and her 50-year-old son were swept away by rushing waters as they crossed a spillway to reach an evacuation center late Wednesday, said Joey Salceda, governor of the affected province of Albay.

“We evacuated them early in the morning but apparently the old woman and her son returned home to get some personal belongings. Before twilight, they were returning to the evacuation centre and got stuck on the spillway,” Salceda said.

Heavy rain continued to fall on Albay and other parts of the Bicol region for the sixth straight day, increasing the danger of landslides and floods and forcing more people to be moved out of their homes, Salceda told AFP.

The government had begun evacuating people from areas prone to flooding and landslides as early as December 24, he said. But more people will likely be moved as the weather bureau forecasts rain until January 2, the governor added.

“We are right now transferring a whole village – 533 people – to an evacuation site,” Salceda said.

Some villagers insist on returning to their houses to watch over their property or get personal items despite the danger, the governor said.

The Albay government was preparing a New Year celebration for the evacuees, consisting of food and entertainment, to convince them not to leave evacuation centres, he said.

Duty to disclose community and separate property in divorce