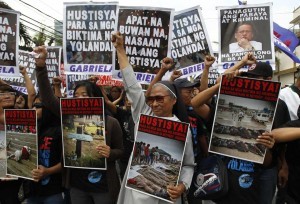 A nun joins the women’s advocacy group GABRIELA and victims of Typhoon Haiyan, during a International Women’s Day protest rally outside the residence of President Benigno Aquino in Quezon city, metro Manila March 8, 2014. The protesters are denouncing what they say is the government’s neglect of disaster victims in central Philippines. On March 8 activists around the globe celebrate International Women’s Day, which dates back to the beginning of the 20th Century and has been observed by the United Nations since 1975. The UN writes that it is an occasion to commemorate achievements in women’s rights and to call for further change. (MNS photo)

Super Typhoon Haiyan raked across the central Philippines last November, killing at least 6,200 people with around 2,000 others still missing, while also displacing four million and leaving tens of thousands of farmers without their livelihoods.

Haiyan hit at a “terrible time” between rice planting seasons but timely seed replacements have ensured a second harvest is not lost, said Jose Graziano da Silva, director-general of the Food and Agriculture Organization (FAO).

Last year the agency had voiced concerns that without the harvest, vulnerable farmers would not have been able to collect rice for almost a year – until October or November 2014.

“I am pleased to say that our support got there in time,” he said in a speech to local farmers who received 1.76 million tons of seeds from the FAO after the typhoon.

“When the crop is harvested (in March or April)… it should yield enough rice to feed 800,000 people for more than a year,” he added.

“This means that they will not only be able to feed their families, but also sell the surplus and generate extra income which is crucial for them to fully recover.”

Graziano da Silva said Haiyan had destroyed 1.1 million tons of crops, along with 33 million coconut trees in a major farming region described by the Philippine government as among the poorest.

He said providing coconut farmers with other sources of income, such as helping them plant faster-yielding crops, was a top FAO priority in the six to eight years it will take for new coconut trees to start bearing fruit.