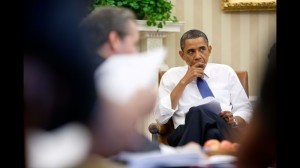 WASHINGTON, August 6, 2011 (AFP) – The United Statesâ€™ credit rating was cut for the first time ever Friday when Standard and Poorâ€™s lowered it from triple-A to AA+, citing the countryâ€™s looming deficit burden and weak policy-making process.

S&P attached a â€œnegative outlookâ€ to the new rating, while government sources involved in the negotiations with the agency attacked its analysis as deeply flawed.

â€œThe downgrade reflects our opinion that the fiscal consolidation plan that Congress and the administration recently agreed to falls short of what, in our view, would be necessary to stabilize the governmentâ€™s medium-term debt dynamics,â€ S&P said in a statement.

â€œMore broadly, the downgrade reflects our view that the effectiveness, stability, and predictability of American policymaking and political institutions have weakened at a time of ongoing fiscal and economic challenges to a degree more than we envisioned when we assigned a negative outlook to the rating on April 18, 2011.â€

S&P said the negative outlook pointed to the possibility of lowering the rating to AA within two years if the government does not cut spending as much as currently pledged, or if higher interest rates and new fiscal pressures worsen the countryâ€™s financial picture.

FilAms Urged to Exercise Right to Choose Next US President