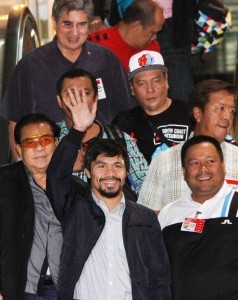 Filipino boxing icon and Sarangani Rep. Manny Pacquiao waves to his well-wishers upon his arrival at the Ninoy Aquino International Airport (NAIA) Terminal 2 from the United States at 4:30 a.m. Friday (April 18, 2014). (MNS photo)

MANILA (Mabuhay) – The United Nationalist Alliance on Monday said it is eyeing Filipino boxing icon and Sarangani Rep. Manny Pacquiao as a possible senatorial candidate in the 2016 national elections.

UNA Secretary General Navotas Rep. Toby Tiangco said in a press briefing that UNA would like to include Pacquiao in its senatorial slate should he decide on running for a national post.

“Kung desidido siyang tumakbo, we’d like to have him,” Tiangco said.

Vice President Jejomar Binay, UNA’s founder, has been quoted as saying in earlier reports that Pacquiao will be included in his senatorial lineup for 2016 since the famed boxer is qualified to run for the Senate.

Among the other lawmakers being considered by UNA for its senatorial slate are Valenzuela Rep. Sherwin Gatchalian, Leyte Rep. Ferdinand Martin Romualdez and BUHAY party-list Rep. Lito Atienza. (MNS)

HR lawyer as slain transgender kin’s counsel vs. US Marine