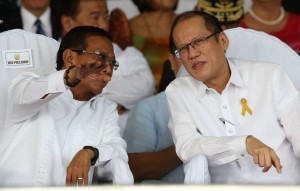 Navotas Representative Toby Tiangco, who is UNA interim president, said Trillnaes has to resort to raising new issues against Binay to arrest the public’s dwindling interest on the Makati parking building anomaly investigation.

“The attacks against the VP will continue to intensify, but since the people are not buying the lies they’re peddling, we expect the Senate telenovela to have a new twist in its second season,” Tiangco said.

“While we don’t know what new claims and allegations they’ll throw at the Vice President, what we know for sure is that all the stories are part of the script to put down the VP’s ratings. Senator Trillanes will again allow witnesses to lie under oath just like what they did in previous hearings,” he added.

Despite this, Tiangco maintained that Binay will address the allegations only in the proper forum, which was the Office of the Ombudsman.

He said the Vice President would not be moved by distractions and would continue to focus on his job.

“I challenge Senator Trillanes to show something concrete that he has done with his over one-billion peso pork barrel and DAP (Disbursement Acceleration Program) funds since he became senator. Maliban doon sa mga overpriced multi-cabs, basketball courts at waiting sheds, ano pa ang konkretong nagawa niya para hanguin ang ating mga kababayan sa kahirapan (what concrete achievements does he have to show aside from the overpriced multi-cabs, basketball courts and waiting sheds to deliver our countrymen from hardship)?” Tiangco challenged.

He added that the Filipino people deserve more than “dirty underhanded political attacks from ambitious presidentiables like Trillanes.”

“Aside from his role in the 2003 Oakwood mutiny and the 2007 Manila Peninsula takeover that all ended in a fiasco, what else did he do to improve the lives of Filipinos? Bago sana siya mag-ambisyong maging presidente, magsilbi muna siya sa bayan (he should render service to the nation first before entertaining thoughts about becoming president),” Tiangco said. (MNS)