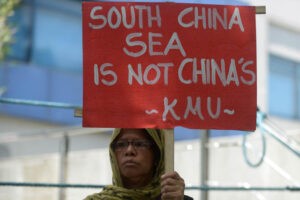 A protester holds a placard at a rally in front of the Chinese Consulate in Makati City on Tuesday, denouncing China’s claim to islands claimed by the Philippines in the Spratly Islands. The Philippines will present China’s aggressiveness in staking its claim during a UN tribunal hearing in the Hague. (MNS photo)

MANILA (Mabuhay) – An international tribunal in The Hague said it will make a crucial ruling on whether it can assume jurisdiction over the Philippines’ legal challenge against China over the South China Sea within the year and gave Beijing another chance to give its side in one month.

The Permanent Court of Arbitration also gave the Philippines up to July 23 to submit “further written responses” to the questions posed by the tribunal during the oral hearings from July 7 to 13 which was attended by Solicitor General Florin Hilbay, Foreign Secretary Albert del Rosario, Manila’s lead counsel Paul Reichler, international law experts, and other top officials of the country. 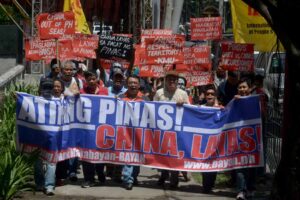 “The Arbitral Tribunal now enters its deliberations and is conscious of its duty under the Rules of Procedure to conduct proceedings ‘to avoid unnecessary delay and expense and to provide a fair and efficient process,’” the PCA said in a statement issued at the end of the oral arguments on July 13.

“The Arbitral Tribunal will endeavor to issue its decision on such issues of Jurisdiction and Admissibility that it determines appropriate as soon as possible and expects to do so before the end of the year,” it added.

Manila brought its maritime disputes with China before international arbitration on January 2013 to try to declare Beijing’s massive claim over virtually the entire resource-rich waters as illegal.

China said it will not participate in the legal proceedings and instead called on the Philippine government to engage them in direct negotiations to resolve their disputes.

Manila said it has exhausted all efforts, including bilateral negotiations, to reach a settlement with China on their maritime row, but Philippine officials say Chinese incursions over the country’s territories have persisted.

China says it has indisputable claim over most parts of the South China Sea – an assertion that Manila branded as “excessive” and a “gross violation of international law.”

Beijing’s sweeping claim also overlaps with the territorial boundaries of its neighbors like Vietnam, Malaysia, Brunei and Taiwan.

Although China did not participate in the hearing, the tribunal maintained that each party will be given “full opportunity to be heard and to present its case.”

The tribunal gave China another chance to comment in writing, by August 17, 2015, on anything said during the hearing.

“The Arbitral Tribunal has kept China updated on all developments in the arbitration and stated that it remains open to China to participate in these proceedings at any stage,” it said.

A transcript of the proceedings will also be provided to the Philippines and China, the PCA said, adding both states have until July 20, 2015 to review it and submit corrections.   (MNS)

Humanitarian Reinstatement of I-130 Petitions