US goes soccer crazy as team eyes second round 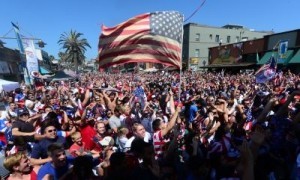 (LOS ANGELES–AFP) – Record numbers of football fans in the United States are bracing for another edge-of-the-seat match Thursday as their team battles to make the World Cup second round — and prove the sport’s growing popularity.

Nearly 25 million viewers tuned in to watch their last game against Portugal, astonishingly more than the NBA finals or baseball’s World Series, mainstays of the US sporting landscape along with American football.

Sports bars and pubs across the country were heaving with fans Sunday night, when the US team came within a whisker of winning an instant pass to the second round, only to be cruelly deprived by a last-gasp Portuguese goal.

But will the millions of football fans evaporate once the US team is out of the contest, maybe as early as Thursday when they take on European heavyweights Germany?

“I don’t think the spike is a blip,” professor Daniel Durbin, director of the Annenberg Institute of Sports, Media and Society at the University of Southern California (USC), told AFP.

“Interest is high partially because the US team has had some success. However, (sports broadcaster) ESPN has used all its considerable resources to promote the World Cup and will continue to flood media with promotion.”

But blogger Matt Verderame of the SB Nation website said the current surge in interest in football — or, soccer for Americans — will likely be short-lived.

“I think once the United States is knocked out of the World Cup, soccer will go back to being a distant fifth sport in America,” he told AFP. “While soccer has made great strides in the US, it still lacks star power.”

The biggest star who has tried to boost football in the United States — where the sport is traditionally seen as a children’s and women’s game — has been Britain’s David Beckham, who spent six years with the Los Angeles Galaxy from 2007.

But his efforts are part of a long history of trying to promote the world’s most popular sport to often skeptical Americans.

In the 1970s, the North American Soccer League (NASL) recruited foreign stars like Brazil’s Pele and Germany’s Franz Beckenbauer to inspire the locals. The league folded in 1984.

But the decision to award the 1994 World Cup to the United States gave it a bigger boost. A year later, a new professional championship was born. Major League Soccer (MLS) has gone from strength to strength since then.

“The popularity of the sport is growing significantly in the United States among that young audience. We believe that bodes well for the future increase in popularity,” he told AFP.

“We certainly believe that the US is rapidly becoming a soccer nation,” he added.

USC professor Durbin said football is benefiting from a general trend of increased demand for live televised sports, even if the uninterrupted format of games may take time to catch on here.

“US viewers have been trained to see their sports narratives broken up by constant commercial breaks. They’ve been taught by baseball, football, and … basketball broadcasts to follow very brief and swift chunks of action…”

“Soccer doesn’t lend itself to this type of broadcast,” he said, but added that US tastes are “changing as more and more US audiences consume international sports such as soccer and rugby.”

Consultant David Carter of The Sports Business Group was more skeptical, saying US fans are watching now through patriotism and excitement rather than long-term loyalty to soccer.

“The massive TV ratings are the result of a compelling global event that has captivated casual fans,” he told AFP.

“Diehard fans are sure to remain engaged in the sport once the World Cup is over.

“However, many that are tuning in now are doing so due to the sense of nationalism and patriotism.

“These large audiences are tuning in for the combination of the sport, the spectacle, national pride, and the ability to party. When these elements wane, so too will TV ratings.”

Video: We Ask Jose Canseco About His Missing Chandeliers [Video]

Journey at Pechanga secures spot among top 20 courses in California