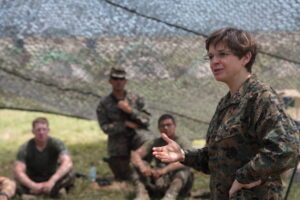 ZAMBALES, Philippines (April 9, 2013) Chaplain of the Marine Corps Rear Adm. Margret G. Kibben speaks to members of the 3rd Law Enforcement Battalion about the work they are doing during Exercise Balikatan 2013. Balikatan is an annual Philippine-U.S. bilateral exercise. Humanitarian assistance and training activities enable the Philippine and American service members to build lasting relationships, train together and provide assistance in communities where the need is the greatest. (U.S. Marine Corps photo by Lance Cpl. Brandon C. Suhr/Released)

Mount Samat, Philippines, AFP, Thursday 4/9/2015 – Philippine President Benigno Aquino and the US and Japanese ambassadors on Thursday vowed to work closer together in facing new challenges like maritime security and “terrorism” at a World War II memorial event.

Aquino and the two envoys made the promise on the anniversary of the “Fall of Bataan” – marking the surrender of US and Philippine forces to Japanese invaders in 1942.

“We stand united with former allies and foes in continued pursuit of widespread peace and prosperity throughout the world,” Aquino said at the Mount Samat shrine overlooking the Bataan battlefield.

Aquino cited the swift assistance extended by the US and Japan particularly during disasters like Super Typhoon Haiyan in 2013 as an example of the generosity of these two countries.

“I wish to express our heartfelt apologies and deep sense of remorse for all who suffered during those fateful days. We all remember and never forget what happened here,” Japanese ambassador Kazuhide Ishikawa said at the same event.

But he added that Japan had since become a democratic nation, a close partner and ally of the Philippines and US.

The Philippines and Japan have been broadening their security cooperation at sea as they both deal with their own respective maritime territorial disputes with an increasingly aggressive China.

The US has also been expanding its own defense cooperation with the two country’s as part its strategic “pivot to Asia”.

US ambassador Philip Goldberg hailed the valor of the Filipino and American soldiers in World War II and also praised the 44 Philippine police commandos who were killed in January while hunting down two militants on the FBI’s “most wanted terrorist” list.

Malaysian Zulkifli Abdhir was killed in the raid, while Filipino Abdul Basit Usman, who the US describe as a “bomb-maker”, escaped.

But the heavy death toll proved an embarrassment to Aquino, and raised questions about the US role in the operation as American personnel were apparently monitoring the Filipino forces.

Goldberg stressed that the US mutual defence treaty with the Philippines was “ironclad”.

“Whether we are fighting terrorism or responding to the devastation of natural disasters, we face them together. And when the Philippines is threatened, it is not alone,” he said.

His remarks came amid concerns over the extent that the US would support the Philippines in a dispute with China.

“Let us not forget that 70 years after the end of World War II, we are joined in our efforts to protect the security and defense of this region by Japan. Yesterday’s enemies are today’s allies and strategic partners,” the US envoy added.

PGC says no onward transmission of BA.2.12 detected in Philippines 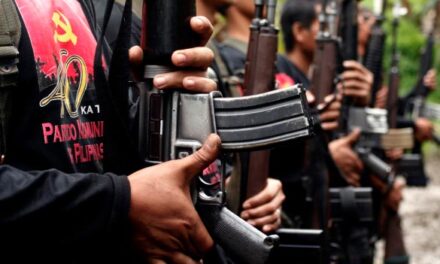