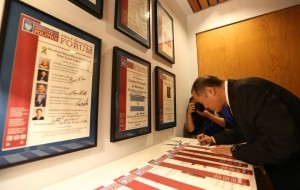 NEW YORK – Saying there is still much ​to​ be done, Manila called​ on Washington to approve ​its request for Temporary Protected Status (TPS) to allow undocumented Filipinos in the United States to help the Philippines rebuild much faster from the devastation wreaked by Typhoon Haiyan.

In letters to Secretary of State John Kerry and Secretary of Homeland Security Jeh Johnson, Foreign Affairs Secretary Albert F. Del Rosario underscored the importance of the request, saying its approval would not only alleviate the plight of eligible Filipinos in the US but also greatly ease the strain placed in the country’s infrastructure and resources.

“I take this opportunity to once again reiterate the Philippine Government’s request for the US Government’s immediate positive consideration of the request.” Secretary Del Rosario said.

“Many of my countrymen in the US were affected by Typhoon Haiyan. This humanitarian assistance would provide temporary relief for them from the natural disaster,” he added.

Secretary Del Rosario sent the letters, which were dated 22 September 2014, to Secretary Kerry and Secretary Johnson more than a month after the Department of Homeland Security (DHS) told leaders of the Filipino-American Community that​the Philippine request to be placed under TPS is still under consideration.

Manila formally filed for TPS designation in December, a few weeks after Typhoon Haiyan, one of the most powerful storms in history, devastated the Central Visayas, killing more than 6,000 people and severely affecting more than 1.4 million others in 17 provinces.

Secretary Del Rosario said a TPS designation for the Philippines will allow more than 200,000 undocumented Filipinos to stay and work legally in the US for at least 18 months.

In previous years, the US granted the same immigration relief to undocumented aliens from El Salvador, Nicaragua and Haiti after these countries were struck by natural disasters and subsequently placed under TPS.

On Wednesday, Secretary Del Rosario met with leaders of the Filipino-American Community led by lawyer J.T. Mallonga, Chair of the National Federation of Filipino-American Associations (NAFFAA) and assured them of the full support of the Philippine Government in pushing the TPS request.

“We stand with you on this issue,” Secretary Del Rosario said, adding that the Philippine Embassy in Washington D.C. and the Consulates General in New York, Chicago, Los Angeles, San Francisco, Honolulu and Guam will continue to work with the Filipino-American Community on the TPS initiative.

Secretary Del Rosarioalso told the Filipino-American Community leaders that he will ​​personally follow up the Philippine request when he meets US officials in Washington ​on Thursday.

In his letters to Secretary Kerry and Secretary Johnson, Secretary Del Rosario said: “In a little over six weeks, the world will observe the first year anniversary of Typhoon Haiyan. While the memory of the devastation still lingers in the mind and psyche of the Filipino people, we have not forgotten the unprecedented outpouring of international support for the Philippines.”

“We will always remember and cherish the invaluable and immediate assistance provided by the United States in the aftermath of Typhoon Haiyan,” Secretary Del Rosario said as he cited the overwhelming and timely response of Washington, which not only provided troops, ships and aircraft but also more than $86 million in assistance.

“However, almost one year after the calamity, there is still much to be done. Massive investments and necessary expertise are still necessary to continue the reconstruction work,” Secretary Del Rosario said.

PHL to send top govt officials to start of arbitration proceedings vs. China