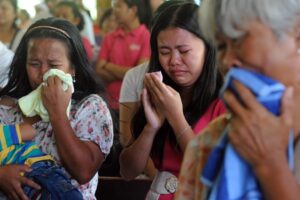 Relatives of footwear factory workers weep during a special Mass in Manila on Monday for the 72 people who were killed during the fire. Authorities are still investigating if conditions in the factory contributed to the death of the workers. Many of those who died were workers trapped during the blaze. (MNS photo)

MANILA (Mabuhay) – After over 70 people were killed in a factory fire in Valenzuela City last week, Malacañang on Tuesday called on Congress to revisit the country’s laws on occupational and fire safety.

Communications Secretary Herminio Coloma Jr. said there is already a need to “update” the Occupational Safety and Health Act, which was enacted in 1970.

At least 72 individuals were confirmed dead in a fire that razed a factory in Valenzuela owned by Kentex Manufacturing Corporation. The Bureau of Fire Protection is currently leading the probe on incident.

Coloma, for his part, said lawmakers should also look into proposals of making local government units responsible for implementing provisions of the country’s law on fire safety.

Malacañang also earlier pledged to intensify inspections of business establishments to ensure that they comply with safety standards.(MNS)

3 ways to contain the ugly holiday shopper within