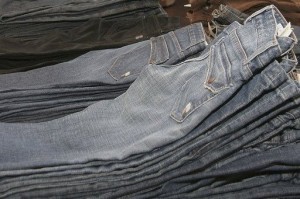 Sandblasting is used to give jeans a fashionable faded look.

MILAN, July 21, 2011 (AFP) – Versace voiced its support on Thursday for a campaign to stop the sandblasting of jeans — a practice used mainly in the developing world and widely condemned as dangerous for workers’ health.

The Italian fashion giant said that none of its suppliers were using the controversial technique and that it had now joined an international campaign “to encourage the elimination of sandblasting as an industry practice.”

Sandblasting is used to give jeans a fashionable faded look.

The Clean Clothes Campaign (CCC) — a coalition of non-governmental organisations and trade unions aimed at improving work conditions in the textile industry — had previously called on Versace to end sandblasting.

“After an intensive campaign… the Italian textile brand Versace has just announced that it will join other denim manufacturers around the globe in calling for a ban on the practice of sandblasting,” the CCC said.

“After many months of silence, Versace now say they agree that the sandblasting operators who make the finishings on the jeans run unacceptable health risks. Previously they had refused to join the call,” it added.

But the operators contract an acute form of silicosis, which has killed many of them.