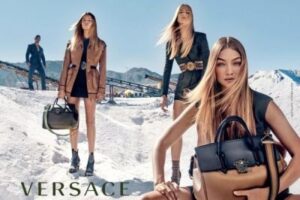 American photographer Klein, especially well known for his work with Madonna and Lady Gaga, took to the Salt Flats in California for the shoot.

Fitness instructor and mixed martial artist Lukasz Grabowski appears in the background for the women’s campaign, and then alongside models Benjamin Benedek and Nathaniel Visser in the men’s images.

The idealized Versace woman is of “an individual who is proud of her own character,” said Donatella Versace in a prepared statement, while the brand’s male archetype for Spring/Summer 2016 is someone “at his most dramatic, fearless and strong. He is a man of his own mind, no matter where he finds himself.”