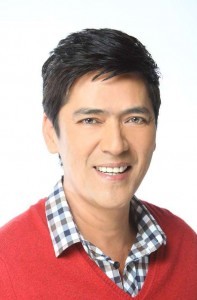 Days before the grand opening day of the 2013 Metro Manila Film Festival (MMFF) in theaters, comedian Vic Sotto is already claiming the box-office top spot for his movie “My Little Bossings.”

Directed by Marlon Rivera, the film centers on the life of Torky Villanueva, played by Vic, who works as a bookkeeper for millionaire cash management specialist Barbara Atienza (Kris Aquino).

The story will start to unfold when Barbara will entrust her son Justin (James “Bimby” Yap Jr.) to Torky. The latter will try to balance his family life with his niece Ica (Aiza Seguerra), a street kid named Ching (Ryzza Mae Dizon) and Justin when they all live under one roof and face each other’s personal conflict.

According to Vic, he’s certain that the movie will garner good box-office results as it caters to all ages, people from all walks of life. He said that they will not only present a comedy movie but a film for the whole family.

“We made it a point that it’s for the whole family, wala siyang tina-target na edad. All bases cover,” he said.

“I personally wanted to present something new, hindi fantasy. This time I really wanted to try new things, iba sa Enteng Kabisote. This is one movie na I can say na pelikula talaga. Lahat pwedeng manood,” he added.

The seasoned comedian revealed that he had actually talked to Kris in the past to guest Bimby in one of his films, but the Kapamilya actress preferred her son to top bill his first big screen debut with Vic.

Vic shared that in the early shooting days, he made sure to build a wall between him and Bimby so that they wouldn’t get too comfortable as their characters always disagree with each other.

“At the start I made it a point that I wouldn’t get close to him. Ayokong maging kumportable sa kanya, or siya sa akin because of the role kasi marami kaming issues sa isa’t isa. Towards the end we’ve grown closer.”

Asked about Bimby’s performance in the movie, Vic said he’s certain that this will not be the boy’s last foray into acting or even movies.

“Considering that this is his first movie and sanay siya sa mga commercial, but for him to carry the character from action hanggang sa pag-cut ng director, I can give him a very, very high passing grade. Magaling palang umarte ang batang ito.”

Kris, Vic didn’t expect ‘My Little Bossings’ to be a huge hit