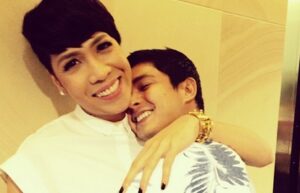 Prized ABS-CBN stars Vice Ganda and Coco Martin have finally started work on their first film together, half a year since they first announced the project.

On Instagram, the “It’s Showtime” co-host shared a photo of him with Martin, captioned: “We’ll make it bigger together. Soon! #TutoyAndDengdeng”

Another photo with the same hashtag shows the two inside a conference room.

“Tutoy” was Vice Ganda’s nickname as a kid, while “Dengdeng” is what close friends and family call Martin. It is unclear, however, if it will be the title of the film to be produced by Star Cinema.

Martin earlier said he expects to have a smooth and fun working relationship with the comedian.

The still-untitled film is set to be released this year, according to Martin.

In a separate interview, Vice Ganda expressed confidence that the movie will be a hit at the box office, just like their respective outings in last year’s Metro Manila Film Festival.