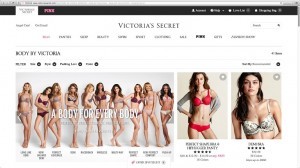 Faced with a petition denouncing the “unhealthy and damaging message” of its “The Perfect Body” campaign, the lingerie brand has modified the tagline on its website.

Released a few weeks ago, the latest Victoria’s Secret advertisements drew plenty of attention. It wasn’t the revealing attire or the sexy models that were in the spotlight, however, but rather the slogan “The Perfect Body,” intended as a reference to the Body bra collection being promoted.
The message drew particularly strong objections from three British women from Leeds, who drew up a petition on www.change.org, urging the brand to apologize and revise its marketing strategy.

“We would like Victoria’s Secret to change the wording on their advertisements for their bra range Body, to something that does not promote unhealthy and unrealistic standards of beauty, as well as pledge to not use such harmful marketing in the future,” states their petition. To get the message across, they encourage supporters to tweet @VictoriasSecret with the hashtag #iamperfect.
On November 5, the three activists announced their petition had reached 25,000 signatures. The following day, they made another announcement: “Amazing news – Victoria’s Secret have changed the wording on their website from ‘The Perfect ‘Body” to ‘A Body For Every Body’…We were not notified by Victoria’s Secret or the press about this, we found it out ourselves.”
But they don’t plan on stopping there, and they will continue to gather signatures until the American brand complies with their other demands: “We still want them to change all of the posters in their stores, apologize and pledge to not use such harmful marketing in the future. So let’s keep spreading the word!”

Contacted by USA Today, the brand apparently declined to comment.

Group calls on Pope Francis to speak out for OFWs

‘GunTV’ to sell firearms to US viewers