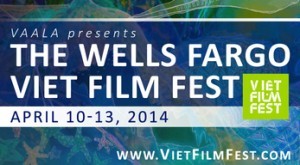 Viet Film Fest 2014 (formerly known as the Vietnamese International Film Festival or ViFF), a prestigious showcase of original and innovative Vietnamese films is proudly presented by the Vietnamese American Arts & Letters Association (VAALA) and will take place on April 10-13, 2014 at a wonderful new location closer to the heart of the Vietnamese community – the UltraLuxe Cinemas at Anaheim Gardenwalk and at the Bowers Museum in Santa Ana.

This year, Viet Film Fest has selected 29 films, including 8 features and 21 short films, from countries all over the world such as Vietnam, Australia, Canada, England, France, Germany, Japan, the United States, and (for the first time) Korea. The festival showcases shorts, documentaries, and feature films that are making their world premiere and U.S. premiere at Viet Film Fest. We invite you to join us in celebrating the collaborative productions of talented directors, writers, and actors with a diverse range of stories to share. These innovative films are shown in their original language with English subtitles included for all films in another language.

Viet Film Fest will be launching an online Viet Film Fest Channel to stream past selections and continue to serve as a vehicle for sharing stories more widely. Continuing the tradition of connecting communities through film, Viet Film Fest will once again offer select screenings for Community Day at the Bowers Museum free of charge to all students and seniors on April 11. These screenings will include the final film project of emerging young film-makers of Youth in Motion, a VAALA film lab program that inspires youth to tell stories, find their voices, and share their visions through film.

For more information about how to support Viet Film Fest: www.indiegogo.com/projects/viet-film-fest-2014