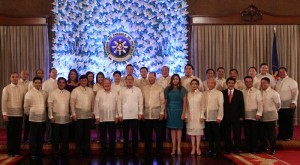 MANILA  (Mabuhay) – Outgoing Senator Manny Villar is pursuing the passage of his pet bill creating separate department for overseas Filipino workers (OFWs) but it die a natural death due lack of support from the House of Representative.

Villar, however, expressed optimism that his proposal will be passed in the next 16th Congress with the election of his wife, Senator-elect Cynthia Villar and reelection of his son, Mark as representative of Las Piñas lone district.

”Senator-elect Cynthia Villar told me that she will file this bill along with her first few bills. I hope it will get support this time from the Lower House to hasten its passage,” Villar said.

With the recent expose on alleged ‘sex-for-flight’ controversy, Villar said it is important to have a separate department that would look into the welfare of the OFWs who have been tagged as ‘modern day heroes’.

”Of course, I’m not saying it (OFWs) would solve all problems but at least such kind of problems will be addressed immediately by the OFW department,” Villar explained.

Last Wednesday, Senator-elect senator Cynthia Villar handed to the three victims the amount covering their travelling expenses going to their respective families in the provinces.

The foundation, which has been affording assistance to OFWs for years, also gave groceries to the three so they can start small businesses.

“This is in line with our livelihood program. They can put up a sari-sari store with the groceries. Now, it is up to them to do their best for their small business to grow,” Cynthia Villar said.

The former Las Piñas congresswoman said the creation of a department for OFWs would simplify and harmonize efforts to look after them and secure their welfare and rights.

“We should ensure that our OFWs are always protected since they are our ‘modern day heroes’, and we draw a lifeline from the remittances they send to their families in the country,” she pointed out.

At present, the problems of the OFWs are being looked into by at least three government agencies – Department of Foreign Affairs, Overseas Workers Welfare Administration and Department of Labor and Employment. (MNS)

City of Angels tops list of best US destinations