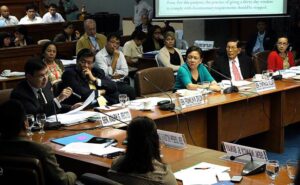 MANILA (Mabuhay) – Sen. Cynthia Villar yesterday welcomed the approval of two executive orders that will govern the disposition and use of the coconut levy assets.

Executive Order 179 signed by President Aquino on March 18, provides the guidelines that will govern the inventory, transfer, reconveyance and disposition of coco levy funds and coco levy assets.

EO 180 provides for the administrative guidelines for the reconveyance and utilization of such assets.

“We are glad to share the priority of this administration to resolve the decades-long issue on the use of the coco levy assets for the benefit of 3.5 million coconut farmers and the development of the coconut industry,” Villar said.

Villar, chair of the Senate Committee on Agriculture and Food, recently sponsored at the Senate the committee report on the bill creating the Coconut Farmers and Industry Trust Fund.

Senate Bill No. 2675 under Committee Report No. 106 also known as Coconut Farmers and Industry Development Act of 2015, seeks to create a trust fund composed of all coconut levy assets, including those declared by the Supreme Court as special public funds.

“While an EO can be implemented immediately, we maintain that a law will have a more permanent effect and will supplement the intention of the executive order to use the coco levy funds for the direct benefit of the farmers,” she added.

Like the EO, the Senate proposed measure requires the conduct of an audit and inventory of all coconut levy assets in order to account for all assets funded out of the coconut levy funds, including its nature, value, description, among others.

The bill also directs the creation of the Coconut Farmers and Industry Trust Fund Committee to direct and coordinate the privatization of the non-cash levy assets.

Under the bill, all cash assets, reported to be about P70 billion, will become the initial capital of the trust fund. All non-cash assets will be transferred to the Trust Fund Committee and will be privatized by the Privatization and Management Office (PMO) within a 5-year period. The proceeds will be remitted to the trust fund and will augment its capital.

The trust fund will be maintained perpetually and can only be invested in Philippine government securities. The Bureau of Treasury will be designated as the depository of the trust fund.

The bill also provides for the formulation of the Coconut Farmers and Industry Development Plan, similar to the “Roadmap” indicated in the EO.

Only programs and projects falling under four categories can be funded, namely, 1) coconut productivity, including intercropping and livestock raising; 2) community-based coconut enterprises, including integrated processing of coconut products and downstream products; 3) coconut farmers organization and development; and 4) social protection programs, such as medical, health and life insurance services, and scholarship grants. (MNS)

Pope visits S. Korea with PHL in his sights