Whether you’re at home or at work, suddenly it seems as if everyone around is sniffling, sneezing and coughing. You worry that youâ€™re going to be next, but then wonder whether youâ€™re just being paranoid.

“I’m in clinic right now and about two out of every three patients I’m seeing have upper respiratory infections,” says Dr. Keith Roach, an associate professor of clinical medicine at New York-Presbyterian/Weill Cornell Medical Center. “At this time of year, when it’s cold outside, we spend more time inside and that makes it easier to swap viruses back and forth.”

Throw in all the crowded holiday gatherings and recent blizzards that cooped everyone up together inside, and you have the makings of a perfect storm for spreading germs. 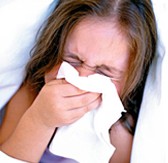 What we’re seeing is the start of the cold and flu season, says Dr. Shanta Zimmer, an infectious disease specialist at the University of Pittsburgh Medical Center. “Nationally weâ€™re seeing an increase in the number of cases of influenza,” Zimmer adds. “It’s just starting to ramp up in different parts of the country.”

The current flu surveillance map from the Centers for Disease Control and Prevention shows flu cases cropping up all over the country, but especially in the south and southwest. Most of cases of the flu so far have been of the seasonal variety, and experts expect to see fewer people sickened by the H1N1 strain this year, Zimmer says.

While the surge in sickness may be partly explained by all the seasonal togetherness, it may also be partly due to the way the viruses themselves work. Some scientists think that viruses are constructed to spread ever so much more efficiently during the winter months, Zimmer says.

If you’re one of the healthy ones and want to stay that way, experts say there are only a few things you can do.

If you’re surrounded by sickies, the simplest and most effective way to prevent upper respiratory infections is to keep washing your hands.

“As I was walking on the streets of New York City today I noticed people wearing face masks,” Roach says. “Thatâ€™s not very helpful. Not many viruses spread through the air. Mostly they spread through hand to hand contact. Thatâ€™s why hand sanitizers are so helpful.”

Other than that, the best thing to do is follow the advice your mom gave you, Zimmer says.

“Get an appropriate amount of rest and avoid sick people,” she adds.

If you haven’t gotten the flu shot, itâ€™s not too late, Roach advises, adding that people should get vaccinated as soon as possible since it takes time for the vaccine to become effective.

Wash your hands frequently
Try to avoid contact with others who are ill
Don’t skimp on getting enough sleep each night
Consider getting a flu shot
If you do get sick, stay home to keep from exposing others

Zimmer cautions that last year’s H1N1 shot won’t protect you against the virus this year. But the good news, she says, is that a single flu shot this year will protect against both H1N1 and the seasonal flu varieties.

Stay home when sick, for the sake of others â€¨If you do get sick, Roach says, fight the urge to go to work and to socialize. “Don’t go out and infect your friends, relatives and coworkers,” he adds. “And if your kids get sick, keep them at home. I know that’s hard to do as a working parent, but it will go a long way to stop the spread of infections.”

Roach cautions people to pay close attention to their symptoms as soon as the sniffling starts. While there isnâ€™t anything to be done for the common cold other than treat the symptoms, the flu can be significantly shortened if you go to the doctor and get a prescription for an antiviral medication. And itâ€™s best to start the medication within 24 hours of the flu’s onset, Roach says.

How do you know the difference between a cold and the flu?

“If it’s the flu, you feel like youâ€™ve been run over by a truck,” Roach says. “It has a rapid onset and often comes with severe muscle aches and a higher fever than the cold.”

Cold-related fevers rarely spike over 101 degrees, Roach says. But the flu fevers can be up around 102 or 103.

If you feel that sick, you need to see the doctor, Roach says. Thatâ€™s because the flu can be life-threatening for some. “You want to be seen as soon as possible,” he adds.