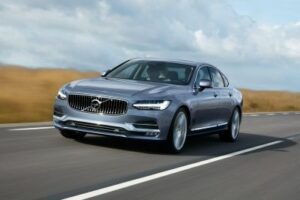 (Relaxnews) – Demand for Volvo’s new flagship SUV might be setting records but the XC90 is about to get some serious competition, from another Volvo.

The Volvo in question, the all new S90, is the first sedan the company has built on its clever new internal architecture and the first thing that onlookers will notice is that the design cues and aesthetic touches that helped the XC90 stand out, move very well from SUV to executive sedan without getting lost in translation.

“Our idea was to bring something entirely new to this rather conservative segment and deliver a visual expression that exudes leadership and confidence on the exterior,” said Thomas Ingenlath, Senior Vice President Design at Volvo Car Group.

Conservative though it may be, unlike the luxury SUV market where it’s easy to make a statement because of the lack of current competition, the S90 will have to offer more than stylish Scandinavian lines if it is to truly stand out next to a BMW 5 Series, Mercedes E Class, Audi A5 or Jaguar XF.

Luckily, Volvo has that covered. “On the inside we have taken the S90 to the next level, delivering a high-end luxury experience that promises comfort and control,” continued Ingenlath.

Volvo isn’t prepared to reveal all just yet — the full unveiling will come in Detroit at the upcoming North American International Auto Show (January 11-24, 2016) — but the company promises the S90 will be overflowing with next-generation active safety features including what Volvo says is one of the most advanced semi-autonomous driving systems.

The car will also connect to the cloud for accessing real-time information and for keeping connected, whether it’s about the prevailing road conditions, potential accidents, or, in the near future as connectivity of this nature is more widespread, the position of other vehicles on the same stretch of road.

“The S90 has taken a big step forward in terms of driving dynamics, performance and ride. We have completely redesigned the Volvo driving experience from the ground up to deliver a sense of precision, engaging control and comfort,” said Dr. Peter Mertens, Senior Vice President, Research & Development at Volvo Car Group.

At launch, the car will be offered with a choice of two four-cylinder petrol engines — one turbocharged, the other turbocharged and supercharged, or as a Twin Engine plug-in hybrid.