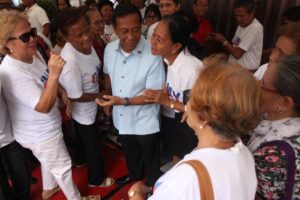 MANILA (Mabuhay) — The camp of Vice President Jejomar Binay on Wednesday hit back at Senator Antonio Trillanes IV for saying that he will bare next week yet another multi-billion peso dummy-related scam involving the second highest elected official in the country.

On Tuesday, Trillanes said there would be another Senate blue ribbon subcommittee inquiry on the new allegations, on top of the string of other corruption claims earlier probed by the Senate panel chaired by Sen. Aquilino “Koko” Pimentel III for the past year.

But Quicho countered that Trillanes has so far failed to show enough evidence to link the Vice President to the corruption allegations against him.

Quicho said Trillanes’ motive behind his “style of discrediting other individuals” is to help his vice-presidential bid in next year’s elections.

The Binay spokesperson again challenged Trillanes to explain the budget spent for his consultants.

To date, Binay, his son, suspended Makati City Mayor Junjun Binay and other Makati officials are facing four plunder and graft complaints before the Office of the Ombudsman in connection with the corruption allegations against them.(MNS)

50k more OFWs expected to be repatriated by end-July — DFA

2,900 arrested in US illegal immigration sweep