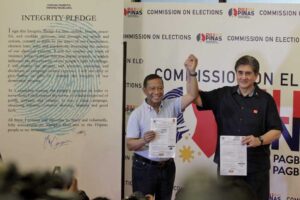 — Vice President Jejomar Binay and Sen. Gringo Honasan show their certificates of candidacy at the Commission on Election in Manila on Monday, the first day of filing of COCs. Binay and Honasan will run under the United Nationalist Alliance (UNA) for the 2016 election. (MNS photo)

Binay and Honasan were the first pair aspiring for the top posts to file their COCs on the first day of the week-long filing at the Commission on Election’s main office in Intramuros, Manila.

The vice president was accompanied by his wife Elenita, and their children, Sen. Nancy Binay and suspended Makati Mayor Junjun Binay.

Binay and Honasan were among the first candidates to arrive at the Comelec’s office at the Palacio del Gobernador.

Minutes before the start of the filing of COCs, Honasan confirmed his vice presidential run.

“I don’t have the luxury of an ego. I’m a soldier and I will follow the party decision,” Honasan told reporters when asked to comment on not being the first choice of UNA as its vice presidential candidate.

The group arrived with a marching band, whose members were wearing Binay shirts.

After a few photos together, the tandem left the Comelec office.

Binay thereafter said the poor Filipinos serve as his inspiration and that he will continue defending them and serving them.

Binay added that alleviating poverty will be his main focus should he be elected president.

Meanwhile, Honasan said running for vice president is a matter of duty, and he has cleared it with his family.

“This is a matter of duty. I was chosen by the party I’m helping organize… I cleared with my family. I have their understanding… I cannot separate my party from my family,” Honasan said.

The lawmaker however admitted he only decided to run for the vice presidential post recently.

“I’ve decided to run a few days ago when I signed my acceptance of the nomination,” he said. (MNS) 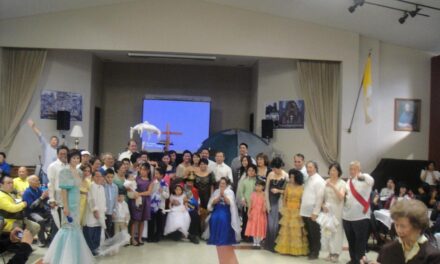