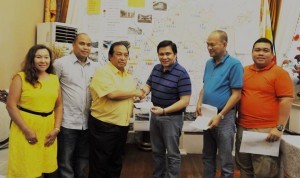 MANILA (Mabuhay) – President Benigno Aquino III might have been vocal about the Disbursement Acceleration Program (DAP) fund controversy, but his vice president isn’t.

On Monday, Vice President Jejomar Binay said he would rather not share his insights on the controversial discretionary fund because of eight pending petitions contesting it before the Supreme Court.

Binay was among those who attended the negcrological services for the late Chief Justice Andres Narvasa, the country’s 19th top judge who passed away Thursday last week.

On Wednesday last week, President Aquino appeared in a television address to defend the DAP. He also criticized those who supposedly equate the DAP to the pork barrel scam to divert public attention away from the alleged anomaly.

Earlier, Arroyo was quoted as saying that President Aquino’s men don’t seem ready to take the bullets for him on the DAP issue, unlike his mother, the late President Corazon Aquino.

“Whenever President Cory was attacked by her detractors, her senior officers – Rene Saguisag, Jun Factoran, Teddy Boy Locsin and Dodo Sarmiento – all Harvard graduates and bar topnotchers, took the bullets for [her] and circled their wagons around her to protect her,” said Arroyo, who once served as Mrs. Aquino’s executive secretary.

There are currently eight SC petitions questioning the DAP, which became an issue after Senator Jinggoy Estrada bared that he and other senators who voted to convict former Chief Justice Renato Corona in May last year received P50 million each in additional funds months after the impeachment trial.

Budget Secretary Florencio Abad has admitted that the funds came from the DAP, but maintained these were not bribes or incentives for senators. He said the DAP fund, which is basically realigned savings, was released to address sluggish government spending in 2011.

A Department of Budget and Management (DBM) National Budget Circular No. 541 dated July 18, 2012 said due to the “under-spending of various agencies,” President Aquino ordered on June 27, 2012 “the withdrawal of all unobligated allotments of all agencies with low level of obligations as of June 30, 2012 both for continuing and current allotment.”

But the petitioners said the funds could not be artificially deemed as “savings” as defined by the DBM and the General Appropriations Act of 2012 since there could be not savings in the middle of a fiscal year, especially if the projects or programs for which these funds were allocated by law, have not been completed, discontinued or abandoned.

They said the resolution of the issue whether Circular 541 or the DAP violates the Constitution, the Executive Order 292 or the Administrative Code  and the appropriations law is not political as it no longer pertains to the wisdom or discretionary act of a public official.

They said the funds accumulated through the DAP are part of the presidential pork barrel, where only the sitting president, or in this case, Aquino, can determine where the funds will go. They said this could be used for patronage politics. (MNS)

DOTC: No choice but to delay MRT-3 expansion project due to TRO