VP Binay respects PNoy’s decision not to endorse him 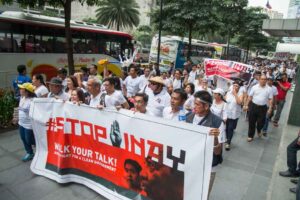 MANILA (Mabuhay) — Vice President Jejomar Binay respects the decision of Pres. Benigno Aquino against endorsing him for the presidential race in 2016, but he assured the public he can continue the reforms initiated by the current administration.

“The President has spoken so we have to respect it. Ang sinasabi ko lang is from my experience, when I was a mayor (of Makati), iyong mga magagandang programa ng mga nauna sa aking mayor ay ipinagpatuloy ko,” he said in an interview with reporters Thursday.

On Thursday, Aquino ruled out the possibility of endorsing Binay, who earlier expressed hope that the President will consider him for the country’s top elected post.

Binay’s camp, meanwhile, is still hopeful that Aquino will change his mind.

“Politics being the art of the possible, there is nothing that can prevent President Aquino from changing his mind in 2016,” lawyer JV Bautista, one of Binay’s spokesperson, said.

He echoed the statement that the Vice President will respect Aquino’s decision.

Bautista also said that the Aquinos “were never known to be staunch LP partidistas.”

“Ninoy Aquino ran in 1978 as Laban and Pres. Cory Aquino supported FVR (Fidel V. Ramos) in 1992 even if the later was not with the administration party,” he said. (MNS)