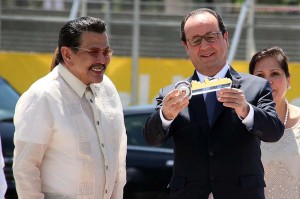 Poe is the daughter of the late Fernando Poe Jr, Estrada’s best friend. VP Binay has long been set to run for president in the coming polls.

The Vice President said UNA is still considering Poe to be his running mate, among others.

However, VP Binay did not give a direct answer when asked whether he is ready if Poe decides to run under the administration’s Liberal Party.

Last week, President Benigno Aquino III admitted meeting Poe to discuss the 2016 polls and his intention to get a winnable candidate that will continue the reforms he had initiated. (MNS)