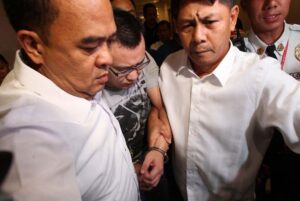 Suspected Chinese crime lord Wang Bo appears at the House of Representatives during a hearing on Tuesday, June 16, to shed light on reports that he bribed Immigration officials in exchange for his freedom. Wang Bo arrived in handcuffs and was surrounded by members of the Legislative Security Bureau. (MNS photo)

MANILA (Mabuhay) – Suspected Chinese crime lord Wang Bo on Tuesday denied bribing officials of the Bureau of Immigration to sign his release papers, as he dismissed the allegation that he gave $10 million to members of the House of Representatives as bribe.

Wang made the categorical denial in response to the questions posed by AVE party-list Rep. Eulogio Magsaysay, who, during the day’s hearing at the House, asked him three times if he was involved in any bribery attempt to gain his freedom.

Addressing Wang, Magsaysay asked: “For the third time, do you have any involvement in the bribery attempt of BI officials?”

Magsaysay followed his question up with another query on whether Wang Bo bribed lawmakers.

A report published by The Standard earlier this month said Wang Bo’s camp shelled out P100 million as bribe to BI officials to sign his release papers.

It also claimed that the suspected Chinese criminal gave $10 million for Malacañang to bribe lawmakers for the passage of the proposed Bangsamoro Basic Law (BBL). Some funds were also reportedly given as contribution to the Liberal Party’s campaign kitty.

The allegation, however, was denied by BI Commissioner Siegfred Mison, as well as by Deputy Immigration Commissioners Abdullah Mangotara and Gilbert Repizo, who favored granting Wang temporary liberty.

The Chinese government had asked Bo to be deported last March 5, but Wang’s camp filed for a motion for reconsideration. He was eventually taken off the Philippine government’s blacklist.

The Chinese Embassy in Manila then made another request for deportation after Beijing cancelled Bo’s passport and submitted additional documents to the BI to prove he is a fugitive.

Mison voted in favor of the Chinese Embassy’s renewed request to deport the Chinese, but he was outvoted by Mangotara and Repizo.

Justice Secretary Leila de Lima, however, issued an order holding Wang’s release in abeyance pending the completion of the investigation on the alleged bribery attempt.

Earlier at the hearing, De Lima dismissed the BBL payola controversy as a “completely preposterous claim.”

“I don’t think the alleged payola, which supposedly happened for the purpose of fundraising, that’s completely preposterous. I’m almost sure of that. If there’s any irregularity, it has to involve only specific individuals, not the entire House. The story about the LP’s involvement and the link to BBL is untrue,” she said. (MNS)