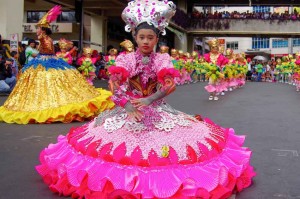 Young girls in floral costumes dance at the opening parade of the month-long Panagbenga Festival celebration Sunday. Students from 12 elementary schools in Benguet competed during the elimination round for a chance to participate in the main Street Dancing Competition on February 28. (MNS photo)

MANILA (Mabuhay) – A citizens’ elections watchdog on Monday asked the Supreme Court to strike down a Commission on Elections resolution allowing Smartmatic-TIM to conduct “diagnostics, repair, and refurbishment” of 80,000 precinct count optical scan (PCOS) machines to be used for the 2016 polls.

In a petition for certiorari and prohibition, the Automated Election System Watch (AES Watch) said the poll body committed grave abuse of discretion when it issued Comelec Resolution 9922, which would set in motion “Program 1” of Smartmatic’s extended warranty proposal, amounting to P300 million.

The group also claimed the Comelec ruling violated the Government Procurement Reform Act and the Commonwealth Act No. 128.

AES Watch spokesperson Nelson Celis branded the Comelec resolution as the “Brillantes midnight deal that paves the way for continuing travesty of our elections by defective Smartmatic PCOS machines and a non-compliant Comelec.”

Celis was referring to Comelec chairman Sixto Brillantes Jr, who is retiring today, along with two other Comelec commissioners.

The petition was filed with the SC by the group’s lawyer, Manuelito Luna, who said the contested Comelec resolution was “not only anomalous but also scandalous because we feel the policy of a public and competitive bidding and transparency requirements of fundamental law was cast aside.”

“We believe the Comelec should have done better since it is the election manager and it knows the law. Unfortunately, that compliance was not met by the Comelec,” the lawyer said.

Bishop Broderick Pabillo, who joined the AES Watch in the petition, noticed how the Comelec seemed to be “rushing” to tap Smartmatic in conducting diagnostics and repair of the counting machines.

He said the SC should issue a temporary restraining order against the resolution, which he feared would be “disadvantageous” to the government.

Pabillo said the Comelec seemed to be intentionally carrying out the maintenance of the PCOS machines in tranches.

Pabillo maintained Smartmatic is not qualified to participate in the bidding for the 2016 elections because the registration it was able to secure from the Securities and Exchange Commission was only for the 2010 polls.

The Comelec acquired the 80,000 PCOS machines from Smartmatic for P1.8 billion.

The Comelec earlier said it might purchase about 40,000 units of the secondary optical mark reader technology in addition to the 80,000 PCOS machines purchased for the previous elections. (MNS)