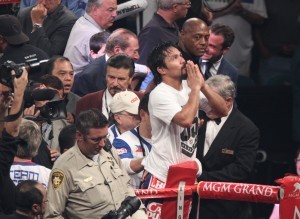 New evangelist Manny Pacquiao offers a prayer to the Lord after a bout with Timothy Bradley that he seemed to have won, at least according to many spectators in the ring and to millions more who saw the fight of TV, but actually lost to Bradley in the eyes of two of the three judges in the fight. Photo: Dr. Ed dela Vega

Bradley, who improved to 29-0 with the victory, seized Pacquaioâ€™s WBO welterweight world title.

But WBO president Francisco â€œPacoâ€ Valcarcel said in a statement that the bodyâ€™s championship committee would review the fight â€œto take measures in accordance with the rules of procedureâ€.

Valcarcel said the committee will meet soon and evaluate video of the fight with the help of five â€œrecognized international judgesâ€.

Based on â€œwhat emergesâ€ the committee will make a recommendation to the WBO.

â€œI want to clarify that in no way this says that we are doubting the capacity of these judges, which we consider as honest and competent judges,â€ Valcarcel said.

Saturdayâ€™s bout in Las Vegas saw judge Jerry Roth give Pacquiao the fight 115-113, but C.J. Ross and Duane Ford both had Bradley winning by the same score, despite Pacquiao appearing to land the more damaging blows throughout the contest.

The fightâ€™s promoter, Bob Arum, questioned the competence of the judges, the selection process the Nevada State Athletic Commission used to choose them, and the fact that all came from Nevada.

While Arum said after the fight that the scoring was the result of incompetence and not corruption, on Monday he said he would ask the Nevada attorney generalâ€™s office â€œfor a full and complete inquiry.â€

On Tuesday, US Senate Majority Leader Harry Reid backed a probe into the decision.

â€œIf an investigation makes everyone feel better, do the investigation,â€ said Reid, who represents Nevada.

Earlier, Arum, who is also the chairman and CEO of Top Rank, submitted a formal request to the Nevada Attorney Generalâ€™s office for a full and complete inquiry into the circumstances surrounding the scoring of Saturdayâ€™s WBO welterweight championship fight between Pacquiao and Bradley.

â€œThe public has a right to know. The fighters have a right to know,â€ said Arum. â€œThe only way to restore fansâ€™ confidence in boxing is by letting an independent body investigate every detail of the fight no matter how big or small. Sunshine never hurt anyone.â€

Bradley, the undefeated WBO junior welterweight champion, won a controversial split decision, dethroning Pacquiao on scores or 115-113, 115-113 and 113-115, in a fight most ringside media and fans thought Pacquiao won by a wide margin.

No Matter The Size Pacman DOMINATES!

Cotto vs. Mayorga: Round by round analysis