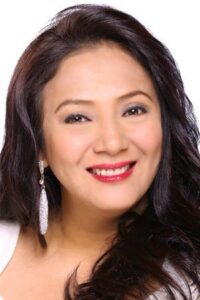 Cherry Pie Picache sees a bit of the Martin Nievera and Pops Fernandez love team back in the 1980s in the tandem of James Reid and Nadine Lustre.

Picache, who plays Jack, the aunt of Clark (Reid), on the ABS-CBN series “On the Wings of Love,” said she can see how the two young stars are determined to do their best in their chosen careers.

“They (James and Nadine) are a very nice love team and they work very hard. That’s the good thing about them. With James, meron pa siya ‘yung sa character niya, ‘yung suot niya, he practices his Tagalog, ‘yung ganyan. Same with Nadine. They work hard,” she said.

Picache said she also sees that Reid and Lustre care for each other even though they are not a couple in real life.

“Another good thing about them, they’re also willing to learn. They’re sweet. I feel that their love team is still evolving, parang nung panahon ni Martin Nievera and Pops Fernandez,” she said.

But the thing that stands out in the two’s tandem, Picache said, is their honesty and sincerity.

“I think ang nakita kong difference ngayon kay James at Nadine is ‘yung may honesty, they know their dreams as a love team, they know what they want, their dreams, the things that they’ve worked for, their feelings towards each other, they know it. There’s an honesty and a sincerity between them, and it’s nice to work in that kind of environment, they are both just being positive,” she explained.

In “On the Wings of Love,” it was Jack’s idea for Leah (Lustre) to tie the knot with Clark, a US resident, so she could have a green card and stay in the country for a longer time.

Clark, on the other hand, was convinced by Jack to marry Leah because he needs of a huge amount of money to pay his debt and Leah is willing to pay him if he would help her.

Last Friday, Leah and Clark already got married for convenience but in the following episodes, it seems that Clark is already falling for Leah.

Directed by Antonette Jadaone and Jojo Saguin, “On the Wings of Love” is the first television series of Reid and Lustre with ABS-CBN. (MNS)

Ara on suing Cristine: It was tough love