Filipino-American apl.de.ap of the Black Eyed Peas explained his decision to return for the second season of “The Voice Philippines,” after rumors swirled that he will not be back as one of the coaches of the competition.

The producer-artist was speaking during an event held in Hard Rock Cafe in Makati City, where he introduced several artists from his music label BMBX (pronounced boombox).

Referring to the hit singing competition, he said: “Discovering the artists, the passion and their stories and of course, the show is fun.”

“I love my co-coaches. We have fun up there. And it is shining a light for our kababayans in our country because we need to be heard,” he added.

For the second season, apl.de.ap, whose real name is Allan Pineda Lindo, will again be joined by his fellow coaches Sarah Geronimo, Lea Salonga, and Bamboo Mañalac. 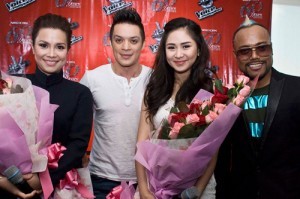 And despite their heavy schedule, he said the feeling of unearthing new talent and helping singers reach new heights make it all worthwhile.

“It is tiring but it’s okay. Kahit na puyat kami. What makes it worthwhile is the artist. ‘Yung mga contestant na nagjo-join. Amazing life stories. It’s not easy to make it there. It’s very touching and that’s what makes it worth it,” he said.

Asked about his decision to sign former The Voice contestant and member of Team Apl, Jessica Reynoso, in his label and production company, he said: “Sometimes you don’t always have to win to win.”

“It’s about giving people chances and really, I feel like a proud father because they are so amazing and just so ready to go,” he added. (MNS)

Bea Alonzo, Carmina Villarroel reveal their dream to work with each other in a project

Gerald no qualms about love scenes with Angelica