Why are local officials the Ombudsman’s top subjects? Pimentel wants to know 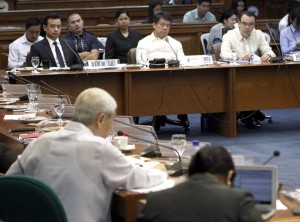 MANILA (Mabuhay) – Senator Aquilino Pimentel III wants to know the extent of graft and corruption practices allegedly committed by local officials that make them the top subject of the cases filed by the Ombudsman in the last four years.

In Senate Resolution 1260 he filed on April 6, Pimentel urged the Senate committee on local government to conduct an inquiry into the Ombudman’s report that for four consecutive years since 2011, local officials top the list of the most number of cases filed before the anti-graft body.

“It becomes imperative to conduct an inquiry into the Ombudsman report to find out the varying forms of graft and corrupt practices that have been committed by the LGU officials, which led to the filing of graft cases against them,” Pimentel said.

Also, he said it is necessary “to determine if the existing anti-corruption laws such as Republic Act No. 3019 (Anti-Graft and Corrupt Practices Act); Republic Act No. 6713 (Code of Conduct and Ethical Standards for Public Officials and Employees); Republic Act No. 9485 (Anti-Red Tape Act of 2007); and other related laws are sufficient to deter graft and corruption.”

A total of 2,053 cases were filed against local officials in 2014, the Office of the Ombudsman’s report showed.

Moreover, Pimentel said the Office of the Ombudsman was created to repress certain acts that constitute graft or corrupt practices committed by of public officers as well as private individuals.

He said Article 11, Section 27 of the Constitution provides: “The State shall maintain honesty and integrity in the public service and take positive and effective measures against graft and corruption, while Art. X1, Sec. 1 states, “Public office is a public trust.”

The senator said corruption at the local level should be eradicated before his proposed “Bigger Pie, Bigger Slice” bill that would bring more resources to local government units and bigger share of the Internal Revenue Allocations is enacted into law. (MNS)