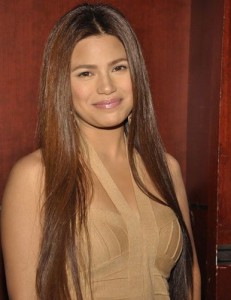 Denise Laurel and her fiancé, basketball player Sol Mercado, got engaged in October 2013 but are only planning to tie the knot in 2016.

The 27-year-old actress explained that she and Mercado are “taking our time and enjoying.”

“I think we want to prepare and enjoy each other, and take the time for Alejandro (Laurel’s son from a previous relationship) also to ease into things. Hindi talaga kami nagmamadali,” she said.

“You know, the best thing he ever told me was, ‘You know, in my heart, kasal na tayo, eh. Follow your dreams and I’ll wait for you.’ Na-touch ako nang bongga doon!”

When asked how Mercado’s relationship is with her son, Laurel said that the two get along much better than she does with her fiancé. This, despite them not being related biologically. Laurel earlier said Alejandro’s father is Italian-American, but refused to divulge his identity.

“When I found out I was pregnant, I was already three and a half months. I found it because delikado pala ‘yung pregnancy ko. I didn’t have pre-natal care for the first trimester,” said Laurel, who gave birth to Alejandro in 2011.

“I call him my ‘little warrior,’ because despite everything that happened, kumapit pa rin siya. He fought through everything. And here he is now, too big for his age and super strong!” (MNS)

You could become a Millionaire by August 19!