Withdrawals by Bistek, Tolentino cause LP to move proclamation of Senate bets 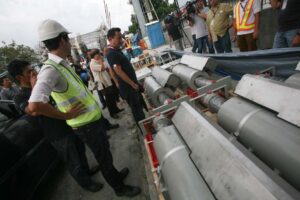 MMDA Chairman Francis Tolentino and Freyssinet project manager Alexandre Gros on Monday inspect the seismic damper that will be attached beneath the Ayala Bridge to help strengthen its foundation. MMDA advised motorists to take alternative routes, as the bridge will remain closed until October 1. (MNS photo)

MANILA  (Mabuhay) – The decisions of Quezon City Mayor Herbert Bautista and Metro Manila Development Authority chairman Francis Tolentino to back out of the Liberal Party’s list of possible senatorial candidates have prompted the ruling party to postpone its proclamation of Senate hopefuls scheduled on Friday.

Bautista is running for re-election while Tolentino indicated that he would still run for senator even if outside the administration slate.

LP standard-bearer Mar Roxas said he met with party chairman President Benigno Aquino III on Thursday night to discuss who would replace Tolentino in the slate.

In a statement on Thursday night, the LP said the Bautista asked for more time to decide whether to accept the party’s senatorial draft.  It added that Tolentino’s withdrawal from the LP slate was a factor in the postponement of the proclamation from Friday to Monday.

“We believe this additional time for discernment is in the best interest of the parties and candidates concerned,” the LP said.

Roxas said the administration’s senatorial slate would have six or at the most, seven LP members. The other five slots will be allotted for coalition partners.

Bautista said that he had decided to run for reelection after consulting with members of his family and other advisers.

“After a process of consultations with constituents, barangay leaders, NGO-PO’s, a spiritual adviser and family we came to finally opt to re-elect as QC Mayor,” he said.

Bautista admitted that he presented to Aquino last year the idea of running for the Senate.

“I had an audience with the President last December. I intimated that if I could be drafted as part of the Senatorial ticket of LP. He replied that you will be considered,” Bautista said.

“I thank the President, Sec Roxas, Speaker Belmonte and the leadership of the Liberal Party for having considered me to be part of the 2016 Senatorial ticket,” he added.

Bautista said the Quezon City chapter of the LP would support the party’s top bets Roxas, vice presidential candidate Leni Robredo and the members of the senatorial ticket.(MNS)