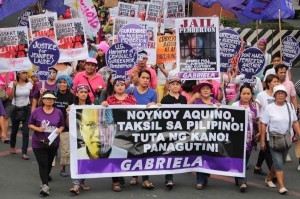 MANILA (Mabuhay) – Gabriela Women’s Party (GWP) has filed a bill that will make legal separation simpler to untie some of the legal hurdles under the Family Code.

Legal separation, one of the existing remedies provided by the Family Code to women suffering from abusive spouses, has unfortunately many arcane governing provisions making it inaccessible and impractical for the poor womenfolk.

The women’s Party-list hopes to untie some of the legal hurdles when it filed House Bill 5238, An Act Expanding the Grounds for Legal Separation, Amending for the Purpose Article 55 of the Family Code on the occasion of the 2014 global commemoration of the 16 Days of Activism to End Violence Against Women.

Rep. Emmi De Jesus said the amendments will not only give women and their children additional State protection consistent with Republic Act No. 9262, also known as the Anti-Violence Against Women and Their Children Act of 2004, but also benefits women’s spouses.

De Jesus pointed out that one of the grounds for separation, the frequency of violent acts, will be replaced with the severity or gravity of the acts, which is also broadened to more clearly define violence to include financial, economic and serious attempts to inflict violence against the woman and her children.

“The need to prove repetitive violence puts women at a disadvantage, as they are forced to go back to abusive husbands before they can ask the courts for legal separation,” De Jesus explained.

Rep. Luz Ilagan also of Gabriela Party-list said their bill is long overdue as the old penal code provisions are out of synch with the Magna Carta of Women.

“Congress must pass HB 5238 as this is also a part of urgent changes endorsed by the government’s own watchdog agency, the Philippine Commission on Women as part of the country’s compliance with the Convention to End Discrimination Against Women or CEDAW,” Ilagan said.

The 2008 National Demographic and Health Survey (NDHS) conducted by the National Statistics Office (NSO) revealed that 14.4 percent of married women have experienced physical abuse from their husbands; and more than one-third (37%) of separated or widowed women have experienced physical violence, implying that domestic violence could be the reason for separation or annulment. (MNS)

Aquino not quite satisfied with papal visit security