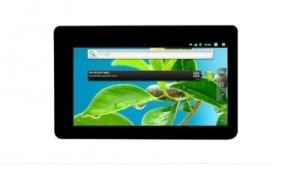 The Datawind UbiSlate 7Ci
The tablet is focused on affordability and accessibility rather than internal specifications and could make a great last-minute stocking filler.
©Datawind

(Relaxnews) – Low on internal specifications but high on affordability, the UbiSlate 7Ci is the world’s first sub-$40 branded Android slate.

Created by Datawind, the UbiSlate 7Ci boasts a 7-inch TFT screen, a Cortex A8 chip, 512MB of RAM and just 4GB of internal storage. Initially built to bring internet and personal computing access to India and officially launched in the region by UN Secretary General, Ban Ki-moon, the tablet has now landed on US and UK shores.

But as well as basic internal specifications reminiscent of those of the first-generation iPad, the tablet comes with a host of preinstalled education, entertainment, gaming and productivity apps. And, because it runs version 4.0 of Android, it will also be able to access the Google Play Store. However, with such a small processor, it’s difficult to know how well it will handle some of the more graphically intense apps; still for just $37.99, it’s bound to attract interest.

As Datawind CEO Suneet Singh Tuli, explains: “The development of the tablet stemmed from the realization that lack of internet adoption in many parts of the world was primarily because of lack of affordability. Our aim is to bridge the gap by offering cost-effective, high-specification devices and internet-access that offer excellent value to all.”

Apparently, this extends to the US where 5 percent of the population still don’t have internet access due to affordability issues. “At Datawind, we’re working to bring affordable technology to the many millions of households who are currently excluded from benefiting from the digital revolution,” added Suneet.

The standard UbiSlate is available to order now, direct from the company’s new US site, as are a selection of slightly more powerful and feature-rich versions including the UbiSlate 7C+ which for $99.99 offers voice calling and a one-year unlimited basic mobile internet connection.

DOH on top of situation, Palace says after monkeypox detection