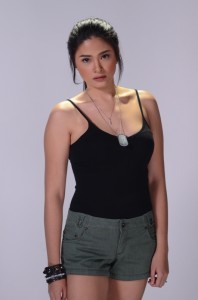 These were Yam Concepcion’s words in describing her break-up with Ejay Falcon, her leading man in the now-defunct afternoon series “Dugong Buhay.”

According to Concepcion, her relationship with Falcon lasted for five months until December 2013. She said they had no formal breakup as the actor supposedly just stopped talking to her and never faced her again.

Nearly a year since the abrupt end of their relationship, the “Pure Love” actress said she has not seen Falcon personally, nor has she been able speak with him about what had happened.

“Wala na! Hindi na talaga. No communication at all. As in, zero.”

Two months after their break-up, Falcon was made to address rumors romantically linking him to Sunshine Cruz, who also co-starred with him and Concepcion in “Dugong Buhay.”

Both Falcon and Cruz denied being in a relationship.

While Concepcion was aware of these rumors, she said she never believed that Cruz was the reason behind her falling out with Falcon.

“I don’t think na si Ms. Sunshine ‘yung reason. Parang wala naman, kasi close naman kami ni Ms. Shine. We’re good friends,” Concepcion said, referring to Cruz being one of her co-stars in “Pure Love.” “And by the looks of it, how we are together, I don’t think there has ever been a relationship kept from me.”

Asked how she felt after Falcon allegedly left her without any explanation, Concepcion said: “Hindi naman ako nagalit. Pinabayaan ko nalang. Siyempre, I felt hurt, [even if it was] a short-lived romance.” (MNS)

Bea Alonzo is now a proud owner of an apartment in Madrid, Spain

Jake Cuenca shares how he relates to ‘Viral Scandal’