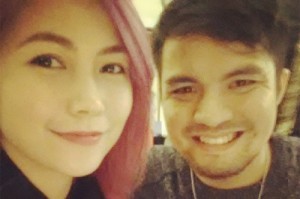 The 24-year-old Constantino posted a photo of two holding hands, with the top hand wearing a ring. In the accompanying caption, Constantino wrote, “I said Yes.”

Asuncion, a worship director at a Christian church in Greenhills, San Juan City, is Constantino’s first boyfriend. They became a couple on June 18, 2013.

In an interview last year, Constantino told reporters that he met Asuncion through a common friend. After hanging out a number of times, they eventually became good friends. However, she said there was a long period of time they did not get to see each other.

But when Constantino and Asuncion met again, the latter went on to court the singer.

The singer’s engagement photo has attracted over 10,500 likes on the popular image-sharing service. (MNS)