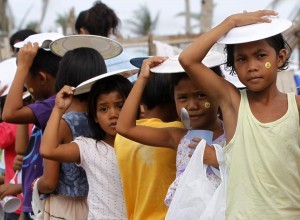 MANILA (Mabuhay) — Children who survived Typhoon Yolanda and are still living in the devastated areas want to play active roles in planning for future emergencies and disasters to help them better cope with post-crisis situations.

This was among the findings of a study by the Save the Children, a leading global and independent organization for children, and several non-governmental organizations (NGOs) which consulted 174 children and young people in Yolanda-stricken areas, specifically asking them what was most important to them after surviving the deadly typhoon.

In the section of the “State of the World’s Mothers 2014: Saving Mothers and Children in Humanitarian Crisis” discussing the Philippines and Yolanda, the report said older children want to take classes in “life skills” such as how to build shelters, environmental science, and fishing.

“They want more friendly spaces for children to share feelings and put their minds at ease. And they want adults and authorities to talk to them about exactly what is going on when a disaster strikes,” the annual report added.

The annual “State of the World’s Mothers” report is now on its 15th edition. For its 2014 edition, the report looks at the impact of humanitarian crises on maternal, newborn, and child survival in countries consistently ranked as the most difficult places to be a mother.

It includes an annual “Mothers’ index,” which this year surveyed 178 countries, and studied in-depth the link between poor performance on the indicators and chronic crises, conflict, and the everyday emergencies faced by mothers and children globally.

The Philippines landed on the 105th slot out of 178 countries ranked, down from last year’s 104th. In the Southeast Asian region, the Philippines is behind Vietnam, Thailand, Malaysia, and Singapore, and just ahead of Timor-Leste and Indonesia.

Children are most vulnerable among survivors

Humanitarian emergencies can have a profound effect on the mental health of mothers and children.

“Abrupt life changes, family separation, worry about loved ones, and loss of community and family support are emotionally difficult for almost everyone caught up in a crisis,” it said.

“Children are especially sensitive to the emotional states of their parents. When mothers and fathers are struggling to deal with their own stress, it can impair the ability of their traumatized children to process their own feelings,” it added.

Ned Olney, Philippine country director of the Save the Children, said Filipinos’ resiliency is being tested by more frequent and increasingly severe emergencies.

“Save the Children is now moving from relief work to the recovery stage. Emergency relief is ending, and we are adapting our activities to support the rebuilding of people’s homes and livelihoods,” Olney told a press conference launching the report.

Dr. Francesca Cuevas, director of health of Save the Children-Philippines, said their organization is restoring the delivery of primary and basic health services.

“Health facilities are still overwhelmed by the great tasks. More than one million people have no access to basic health services. Pregnant women are giving birth without access to safe and clean health facilities,” Cuevas said.

Cuevas added that psycho-social health services to mothers and children should be given priority because they are the “most vulnerable and most compromised” segment of the population affected by Yolanda.

Both Olney and Cuevas announced the pre-positioning of “BEACON Boxes” in Yolanda-hit areas to protect pregnant women and newborns in vulnerable areas against future natural disasters such as typhoons and failures delivery of health services.

The BEACON Box, or Birthing Essentials And Care Of Newborns Box, contains all basic tools and materials necessary to help a pregnant woman deliver in a safe and clean environment and packaged in a storm-proof box.

Cuevas said the BEACON Box will be prepositioned in the most vulnerable barangays in the Yolanda-affected areas, where more than 750 births are expected every day.

The BEACON Box supplies include plastic sheets, a tarpaulin, soap, sterile cord ties, sterile blades, clean towels, a birth certificate, and a lamp. The box aims to assist a pregnant woman in “giving birth in a clean environment if she cannot get to a health clinic.”

Statistically, more than 100 of those were likely to have involved a potentially life threatening complication, Cueva added.

“We simply must all work harder to help communities prepare for disasters and protect pregnant women and newborns,” Olney said.

Meanwhile, the “State of the World’s Mothers 2014: Saving Mothers and Children in Humanitarian Crisis” said that in the Philippines, an increasing percentage of deaths of children under 5 years of age are occurring among newborn babies in the first month of life.

“Worldwide, women and children are much more likely than men to die in a disaster, whether man-made or natural,” it said.

There is an urgent need to increase access to healthcare in places where the government’s capacity is weak and conflict and insecurity is widespread, it added.

Save the Children was one of the first international agencies to respond after Yolanda and remains the largest responder in some of the worst affected areas.

Almost six months after Yolanda wreaked havoc, the agency has helped more than 470,000 children and adults with assistance, including food, water, medicines, shelter, and hygiene items.

Olney said a “big focus” of their group is working to “keep children safe and in education.”

“Future disasters are inevitable and because of climate change they are likely to become even more common. The agency’s response is therefore not only supporting the huge recovery effort, but is also helping affected communities adapt and prepare for future disasters,” Olney said.

“Yolanda showed us the importance of helping mothers when vital services are destroyed or disrupted. It also showed us that after the initial emergency has passed, existing institutions can be rebuilt and aid can get through quickly,” he added.

He said it must be ensured that the poorest of the poor are not “left completely unprepared” and that “every child has the right to survive, no matter where he or she is born.”

Save the Children is urging the government and the civil society:

• Ensure that every mother and newborn living in crisis has access to high quality health care,

• Build stronger health systems to minimize the damaging effects of crises on health,

• Develop national and local preparedness plans tailored to respond to the specific needs of mothers, children, and babies in emergencies, and

• Ensure adequate financing and coordination to timely respond to mothers’ and children’s needs in emergencies. (MNS)