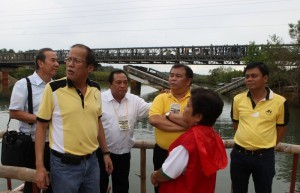 President Benigno S. Aquino III inspects the rehabilitation of Tagbuane Bridge in the Municipality of Alburquerque in Bohol on Thursday (November 28). The province was rocked by a 7.2 tremor that killed over 220 and toppled over 2,000 homes and buildings on October 15. (MNS photo)

In its 6 a.m. update, the NDRRMC also said 26,233 people were reported injured while 1,761 are still missing in Yolanda’s wake.

It said this meant 358 truck trips for clearing the debris.

The MMDA has turned over the clearing operations to the City Engineering Office and the Department of Public Works and Highways.

In Roxas in Capiz, water services had resumed but the water supply remains limited.