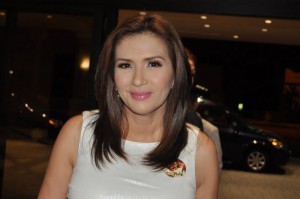 â€œI can talk to you in Tagalog, right?â€ Zsa Zsa Padilla asked me midway through this exclusive interview during the 4th Annual White Party and Fashion Show at Hilton Pasadena on Aug. 25, 2012. She was in Los Angeles to have a cyst surgically removed from her left kidney in Cedars-Sinai Hospital. Baptized appropriately as the â€œDivine Divaâ€ by the Philippine media, she has definitely exuded grace and class despite the recent tribulations that have come in her life.

ZSA ZSA also joined Dr. Vicki Belo onstage to share their beauty secrets to the audience during the 4th Annual White Party and Fashion Show at Hilton Pasadena on Aug. 25, 2012. Unicot and V8 Productions, the companies that organized the star-studded event, donated a part of the proceeds to Gawad Kalinga.
Richard Lao photo

Zsa Zsa shared that she first entertained the thought of cancer when a polyp was found in May. â€œMy doctor from Manila was unsure whether it was cancer or not unless through a biopsy,â€ Zsa Zsa said. It turns out, that this was not the first renal problem that Zsa Zsa has encountered. â€œI had a defective left ureter which was surgically repaired in 2006, my left kidney has been distended since then,â€ she revealed. As a result, she has a yearly renal check up. â€œDuring my check-up last April (of 2011), everything was perfect until I experienced pain last May,â€ Zsa Zsa shared. She was preoccupied with attending to Dolphyâ€™s declining health that she missed her April check-up. â€œWhen the results came back, the doctor said that my BUN and creatinine results were high,â€ she said. Elevated BUN (blood urea nitrogen) and creatinine are two serum laboratory values that are indicative of kidney injury.

â€œWhatâ€™s happening kaya?â€ Zsa Zsa asked her doctor, who was worried about the polyp. After that, she had an ultrasound, which revealed an abnormal growth. The doctor performed other tests such as a CT scan and another ultrasound in the following months to visually examine her kidneys. Last July, the doctor finally recommended surgery. Zsa Zsa asked her doctor if she can have a second opinion and he agreed. 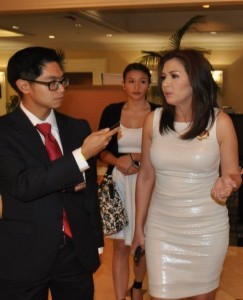 THE columnist interviewing Zsa Zsa. Zia Quizon (middle) was also in Los Angeles to accompany her mother during her surgery.
Richard Lao photo

â€œDr. (Larry)Â Froch of Cedars-Sinai Hospital, who was also Dolphyâ€™s doctor back when he was in UCLA, saw the growth and he also said I needed surgery,â€ she revealed. She underwent a partial left nephrectomy, which is the removal of a part of the kidney, on Aug. 27, 2012. Zia Quizon, Zsa Zsaâ€™s daughter, announced the operationâ€™s success that same day via Twitter: â€œAs far as the doctors could tell it (cancer) has not spread anywhere else. Thank you everyone for your prayers and support.â€

Zsa Zsa has kept her poise amidst the sadness of losing a loved one and the appearance of a deadly disease. In the end, she won her battle against cancer. Zsa Zsa definitely deserves to be called the Divine Diva. Not just for her majestic voice but for her unmatched grace in the face of adversity as well.